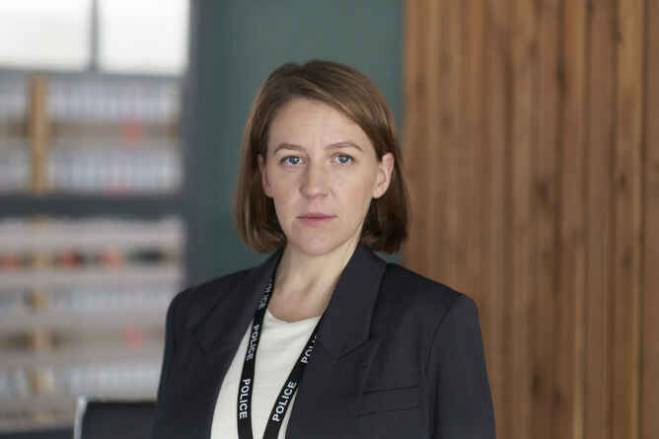 What appealed to you about working on this series?

I loved the scripts immediately, and then of course I heard that Jed Mercurio was involved with the show and everything he touches turns to gold! I loved the issues the drama was addressing, the subtlety of it, and the drama too – when we start you think you know what the story is going to be and then it becomes deeper and richer as you read on, it surprises you. I’m a big fan of Parminder’s too, and strangely enough Maya and I were in a ‘Funny Women’ competition together years ago, so there were lots of connections and things that made it a lovely fit.

Also, the job offer came in when I was heavily pregnant and the producer said, “We know you’ll have just had a baby but we’d really like to make it work for you and support you. We want to show that obviously women in the industry can work when they’re mothers.” So, they were really very kind and met me more than halfway in terms of making it work with a new born. That was incredibly appealing to me, that someone was so generous and willing to make it work. Our writer, Maya understood as well of course, as she has two young kids, and the director was really willing to make it work too.

Women can work after having children, we’re not ill, we just have to step off every now and again and feed our baby, but that’s OK. I’ve been fortunate enough to work with both of my children and you’ve just got to get on with it – women are pretty spectacular and we know how to juggle.

What was your experience like, filming while also caring for a young baby?

Well Freddie was five weeks old when we started filming, and just after I gave birth to him I did say, “Oh my God, why did I say yes to a job? I’m never going to manage that!” because you go into a two-week tunnel of despair right afterwards. I wondered what on earth I was doing. But in a way it was the best time to work because they sleep a lot at that age.

So we hired a nanny and he just slept on her, and then he was right on set with me so I would just feed him and then he would fall back to sleep, it was great. I only worked about 12 days over a six-week period, but it was really nice. I’m lucky enough to adore my job, so it was great to be in an environment I really thrive in and experience a bit of normality. I was so glad to do it and to be made me feel so welcome and not to feel guilty that I had to feed him, it was never a battle.

How would you describe your character, DCI Kerry Henderson?

When we first meet her, Kerry really feels that Rachita has been given a bump up before she’s ready. In Kerry’s view, everyone else has worked their way up through the ranks and earned their place in the team, whereas Rachita has had a ‘have a go hero moment’ as Kerry sees it, and hasn’t earned her job title. And so for Kerry, Rachita has got to prove herself, she’s got no time for her initially and gives her a hard time. She doesn’t trust that Rachita’s on top of everything, and believes she’s not experienced enough for the job, so she really tests her and that comes across as quite cold. She does start to change her mind about Rachita, especially towards the end of the series, because she can see that Rachita was ready for this job after all, and she has shown that she was always up to the task. She really proves herself but initially Kerry didn’t trust that would happen.

Do you think Kerry’s opinions are based on racism?

We discussed this quite heavily – I don’t know how it comes across in the episodes, but I was really hopeful that it wasn’t a race thing for Kerry. For me, Kerry’s issue was definitely that Rachita is pulling rank too early and that she’s suspicious of her ability, it’s not ever about her ethnicity. But of course, there will be that argument about that among the audience, because there are blurred lines in how people see things. In my mind though, and having talked to the directors, it was only ever that it would be Rachita’s ability that Kerry is calling into question.

How does the drama deal with Rachita’s worries about her identity and racism in the workplace?

I think it addresses a lot of things that people might be frightened to talk about, and those themes are subtly knitted into the language of the piece – it explores the everyday racism that Rachita comes up against and is forced to confront, and it even looks at positive discrimination too. Our writer Maya has lived these experiences, so these moments are really well written and come from a very strong place of experience. It’s almost like gaslighting in places, where you think, “Did they just say that? Did that just happen?” It’s really great that the drama is showing these things that are unfortunately an everyday occurrence – the language people use, the looks that are given and even the thoughts that people just don’t say. It’s not the broad strokes, it’s the tiny, almost imperceptible moments.

You recently played a detective in ITV drama The Tower, are you an expert in policing now?!

Well Kerry is one rank up from that character, so I’ve been promoted! It was always my dream to play a detective, so I’m quite excited to have played two in a year, but maybe that means I should do a period drama next. I definitely wouldn’t say no to playing more detectives though.

It’s always nice to have the police consultants on set with us, and they tell us a lot about how we would behave, or interact with evidence – they help you navigate the reality and mechanics of being at a crime scene. I love learning about that world, and I tried to learn as much as I could before and on the job. We were so lucky we had so many ex-detectives playing extras and they were just such a great source of information and really interesting to talk to. The guy who was my driver on DI Ray was an excopper and he was telling me about how he used to be an undercover officer, in the deep heart of the drugs world. He was a lovely man who likes to play golf at the weekend, but he said he grew a beard and long hair and went deep undercover, he had an amazing backstory. The case the team is investigating in this series has some really shocking moments. It’s bigger than any of them thought it would be when they started, they realise they are dealing with something much more complex.

You’re a fan of Jed’s work, did you enjoy collaborating on DI Ray?

I’m such a massive fan of his but it turns out I didn’t even know what he looked like! One day we were on set and I knew he was supposed to be coming down. I was speaking to someone and then it slowly dawned on me that this was Jed I was talking to, I was like, “Oh my God!” He’s just the nicest, most down to earth, brilliant, funny man, just as you might expect, and he’s so good at his job, he’s full of great insights and ideas. So yes, it was really great working with him, and like I said, everything he touches is gold so it was lovely to be cast on a project like that.

Did you enjoy filming in Birmingham?

Yes, I’d never had the opportunity to shoot there before. I am from Leeds originally but I lived quite a lot of my teenage years in Solihull, just south of Birmingham. So I’m quite familiar with the city, and it was really nice working there, especially being near my mum and visiting her while we were up there. Parminder spent most weekends in nearby Leicester with her family as well, we all had Brummie links, which was probably quite important for the casting, having that authenticity. I hadn’t worked with Parminder before but we got on really well, she’s a great woman and it was so nice to work with her.

What do you hope that viewers most enjoy about this series?

I hope that the audience will reflect on some of the themes – the more subtle end of language that we use and choices that we make that maybe were well-intended but are actually ill-received. It’s a thought-provoking series, but also this is a Jed Mercurio drama too, and it’s a thriller. You think the story is going one way but it ends up going so much deeper and further than you first thought. The world that develops is so exciting and you’ll find yourself second guessing so many things, I think people will get a lot out of it.

Why do you think crime dramas remain so popular?

I think everyone is just so fascinated by that psychology, aren’t they? In crime drama you see things you would never do yourself, it’s an underworld that we’re not party to and we don’t want that drama in our everyday lives. But there’s something about watching people going through it and dealing with mild to huge peril from the comfort of your sofa! It’s endlessly fascinating with so many different angles, there’s no limit to the awful things that humans can do as criminals. I think people just love a mystery too and trying to work things out for themselves.