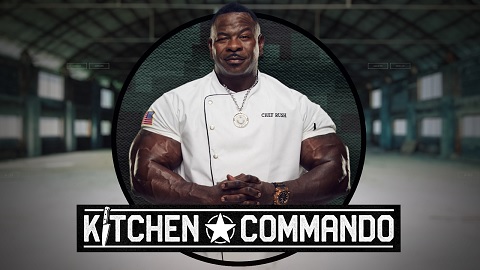 For its first original unscripted cooking series, Tubi has announced today the premiere of KITCHEN COMMANDO.

Produced by Gordon Ramsay’s Studio Ramsay Global and FOX Alternative Entertainment (creators of “Next Level Chef“), KITCHEN COMMANDO follows Chef Andre Rush as he embarks on a mission to rescue failing restaurants and rekindle their passion for the service industry. On Super Bowl LVII, Sunday, February 12, 2023, the first episode of KITCHEN COMMANDO will air with new episodes following weekly on Sunday.

“I’m so thrilled to bring KITCHEN COMMANDO to Tubi viewers,” said series Executive Producer Gordon Ramsay. “Spending time with Chef Rush, I know firsthand his dedication to the food world, and his story is an inspiration to any chef. And trust me, his arms are no joke!”

In the course of 10 episodes, Chef Rush will go to restaurants in the Washington, D.C., area that could benefit from his self-discipline and ingenuity. Each episode will feature Chef Rush using his considerable skills to get the restaurants back in shape.

In the pilot episode, Chef Rush encounters a downtrodden married couple whose once-viral crab-themed restaurant has devolved into a cesspool and whose attitudes haven’t improved much either. Can the ship’s kitchen be saved by Chef Rush?

In 2021, Gordon Ramsay and FOX Entertainment jointly formed STUDIO RAMSAY GLOBAL, a new production entity co-owned by the two that is developing, producing, and distributing culinary and lifestyle programming for FOX, its ad-supported streaming platform, Tubi, and platforms worldwide.