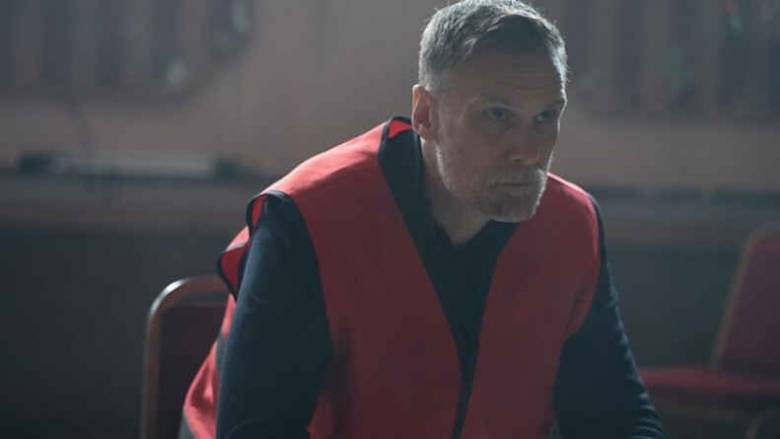 What is The Outlaws?

The Outlaws is about a group of people who are all independently assigned to community service, following their own individual escapades and misdemeanours. It’s a bringing together of this cross section of society, and initially we take these characters very much at face value, almost to the point of them being stereotypes in a way. And then through this shared experience, and what becomes a shared problem that needs resolving, we really see them sort of come together.

Who do you play?

I play John Halloran, sometimes known as John Jr. Which makes him sound like a character from The Waltons. He’s very much the son of an Irish Catholic: someone who’s grown up in the shadow of a very dominant, aggressive, opinionated, paternal figure. And someone who hasn’t really seen or experienced much support and love and affection. As a result, at the outset of the series (when we first meet him) he is very defensive, very standoffish, a loud mouth and an antagonist. He’s someone who’s very willing to throw his weight around, verbally or physically, whenever he feels it’s necessary. Essentially, though, he’s the sort of person who goes through life picking lots of small fights because he’s been unable to resolve the big conflict within himself.

What’s he done or not done to end up on the community payback scheme?

He’s had a violent encounter, and we find out later that he’s been accused of racially aggravated assault. We’ll find out even further down the line whether or not the accusation is true. It all very much plays into this idea that runs right through this series, of judging at first sight and the assumptions that we make about people (often judgements based on very little information).

I don’t think of John as a racist, although that’s one of the stereotypes that some might draw in those very, very early stages. I do think John represents this idea of this sort of inherited worldview. Sometimes, without realising it, we can basically be a sort of loudhailer for somebody else’s rhetoric, and we can go through a good chunk of our lives repeating that and taking it as read without ever stepping back.

That’s very much where John begins his journey. He’s very much in the pocket of John Sr. in terms of how the world works, what’s expected of you and what you should expect of others. And it takes a while for him to step back and refocus his awareness, and also his relationship with his dad.

What do the group actually have to do on the Community Payback Scheme?

Our community service is a very communal one in the sense that we have been tasked with fixing up a community centre. It’s a wreck at the beginning and our team has been charged with renovating it. There’s a symbolism in that itself, in this sense of coming together and creating something that starts as a derelict mess, but will end up being something about a community. That’s, in part, the story of the series.

How does John relate to the rest of the group? Does he make particular friends or enemies?

In the initial stages, he’s very standoffish and absolutely refuses to align himself with anyone. Mostly because he sees everyone else as a legitimate criminal, whereas he sees himself as a victim of a broken criminal justice system. He doesn’t care to know the ins and outs of everyone else’s story, (they’re just criminals), and there’s a slight superiority he feels over this situation because in his mind he absolutely shouldn’t be there.

John and Myrna [Clare Perkins] are the first to really clash. I think John cannot bear anyone who constantly hops up on their pedestal to correct everybody else about their terminology. And I think that his response to Myrna is as much about this inability to let that kind of shit go: he has to jump on it. Subsequently, however, as the series progresses, they are the two that become quite aligned. Their two ideologies colliding becomes the basis for this great and odd couple relationship.

What did you like about this script and this role?

Wow. I could really get gushy here but I have to say that I really think that Stephen Merchant has created something that I don’t think we’ve seen before. I don’t think I’ve ever read anything that’s so funny but also so unique and so timely, and I would even go so far as to say so important. It’s lots of things – a sort of comedy, drama, heist, action adventure – but the real story it’s telling runs so much deeper. We’re throwing a spotlight on people’s prejudices and inherited worldviews.

Initially the show doesn’t shy away from looking at these people at their ugliest. But then the script gives them the opportunity to shed those sorts of blinkered views and we get to see what’s really brought them there. I read this quote recently by Audre Lorde, who said: “It’s not our differences that divide us. It is our inability to recognise, accept and celebrate those differences.” I think The Outlaws holds that sentiment very, very close to its heart.

You’ve worked with many great actors. What was it like working with Christopher Walken?

It took everything in my power to not mention The Deer Hunter the minute I met him. I mean in the truest sense of the word, does it get more iconic than Christopher  Walken? There’s a sequence in (I think) episode four where there’s a little bit of dancing involved. I’m not going to give anything away but there is this music playing and a couple of characters are dancing, one of whom is Frank played by Christopher Walken. Now I pride myself on it taking a lot to throw me when I’m on camera. It takes a lot to throw me and make me sort of go out of character or corpse. But in this scene my character was sweeping and I have to sort of sweep and then look up and he’s standing there in front of me holding his broom giving it the Walken boogie. And it took everything in my power not to just sack everything off for a minute and just take that in as Darren Boyd. Because I was like, that’s never happening again. He’s been amazing.