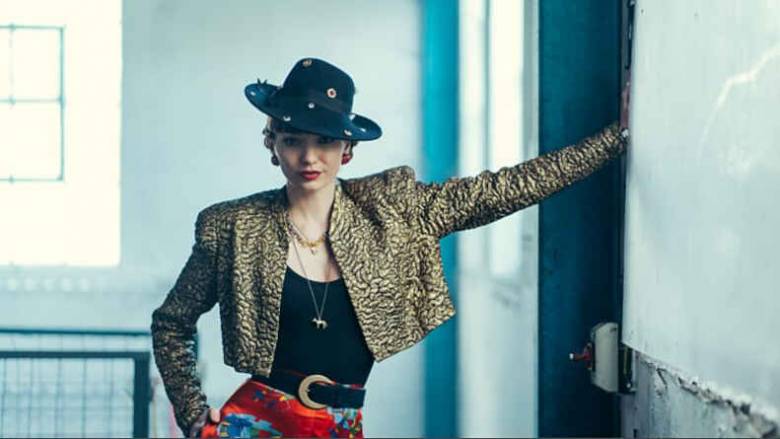 Who is Gabby and how does she fit in to the story on The Outlaws?

Gabby is a sort of Instagram-famous socialite. She’s descended from the landed gentry and she’s a bit outrageous. She’s that classic girl who’s had everything you could ever buy, but never had what she probably needs… which love from her father, who’s been absent.

So she’s fallen into behaviour that feels all about her trying to be noticed and loved. And she surrounds herself with people who don’t really have her best interests at heart. But she’s fascinating. She’s hilarious. She’s a great one for a cause but without really understanding the cause. She’s just gets behind something and hilariously gets it wrong all the time. She’s always saying the wrong things without really knowing what she’s saying, which adds to the hilarity of her character. We watch her make these mistakes that just make you cringe.

How has she landed up on the community service scheme?

She’s been arrested for drink driving and also vandalism of her ex’s car. She’s definitely wild! She’s doing her Community Payback for just being a menace to society, really. But throughout that, we see her finding her place in the group (and somewhat being excluded for a while before they actually need her). Then, eventually, she finds her place and her true calling. It’s how she’s able to help the group with their mission and it’s a mission we probably shouldn’t be rooting for. But we are.

Ultimately, she comes from a very broken background. There’s her mother’s suicide in there, and her very complicated relationship with her father, and never feeling that she was quite good enough. Her father thinks money will take care of her, help get nannies and staff to do the work, and he tries to have as little involvement with her as possible. She’s just grown up to be very broken and insecure.

We see her go on this journey where she finds this group of people that she befriends. She’s only really used to friends sponging off her. She’s famous because people want to be seen with her and because she’ll pick up the tab for everything. Here it’s different, or it seems to be. There are some lovely scenes with Stephen [Merchant’s] character Greg where we see the reality of her. We see her without the flash, instead, being honest about what she’s coming from and why she is the way that she is. She is just desperate to be loved and she’s desperate to be wanted. She’s actually hurting quite a lot and she’s chosen a life of drugs and alcohol to hide behind. But as the series goes on, we see her sort of trying to make those changes in her life to ultimately become a better person.

I see enough of these people on Instagram to know exactly what they’re like. But no, I personally don’t follow them. I mean, they couldn’t have picked a more un-tech savvy or un-Instagram savvy actress to play Gabby. It really is hilarious. There’s so many moments where Gabby has to record Instagram Live-type videos – and I’ve only ever done one (with a friend who did it). So I’m completely clueless. I always have to ask the kind of cool members of the group: how does this work?

I think the world is saturated now with Instagrammers and bloggers and that’s great. You know, it’s an amazing way to make a living, if you can do that, if you’ve got that type of personality. For me, in terms of research, it’s just an observation of different characters, people that I’ve met at various points in my career at events or what have you. Obviously, there are people that you come across that you just think, wow! What on earth…

What did you make of the scripts for The Outlaws?

They are hilarious. It’s one of the funniest things I’ve ever read. Each episode discovers more about each character, but you see these characters go on a fantastic journey in it. And the dialogue is his laugh-out-loud funny, genuinely. I think it’s a very special series. I’m just intrigued to see how it all comes together. As a cast, we are all so different. They have got together the most random group of people.

Including one Christopher Walken…

Yeah, extraordinary. Christopher Walken is just a total legend of this business. When I first met him I was shaking. I was so nervous. I just couldn’t string a sentence together. But he’s also been fascinating to watch and learn from.

What part does the city of Bristol play in the drama?

It’s an enormous part. Bristol is a fantastic city: a real hub of energy and excitement. And so much of this will resonate with the people who know the city well. It provides so much more than a backdrop: it’s one of the key characters. Stephen, of course, is from Bristol and he knows more about it than anyone.

You’ve done many brilliant serious roles but fewer comic ones. What have you learned making The Outlaws?

Comedy comes when it’s quick, when it’s slick, and you just have to have this confidence that you’re being funny. I’ve done comedy over the years, but having done so much serious drama, to then work with the likes of Stephen Merchant and Jess [Gunning] – they’re just naturally so funny. It makes you aware how high the bar is. And you just have to be on it. It’s been a challenge but it’s been great.