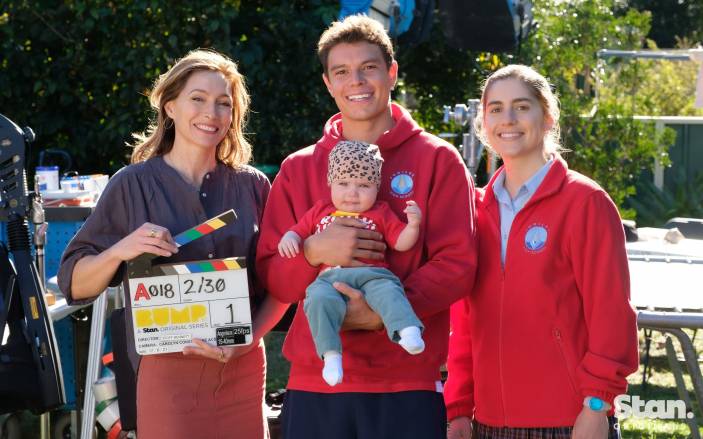 Stan’s existing large investment in original productions will be increased as a result of the developments, allowing users to access more quality film and television content.

Black Snow, a cold case mystery series set in North Queensland; Last Light, starring Matthew Fox in his highly anticipated return to television alongside SAG Award winner Joanne Froggatt; and The Jump, a series about the power of friendship and the ways our sadness can unite us, are among the new Stan Originals announced today.

Stan Chief Executive Officer Martin Kugeler said: “Stan Originals have always been a key pillar of our content strategy and are amongst our highest performing programs in terms of subscriber acquisition and engagement. Today’s announcement reflects Stan’s ability to deliver a significantly increasing number of high quality original productions. This new slate of Stan Originals will see us partner with some of the world’s most sought-after producers both locally and internationally, alongside our newly expanded partnership with Hollywood studio Lionsgate and our collaborative initiative with the 9Network. Our subscribers have an outstanding lineup of premium original content to look forward to on Stan.”

Stan Chief Content Officer Cailah Scobie said: “Every year we bring fresh, distinctive and engaging Stan Originals to Australian audiences and with this new slate Stan will continue to entertain and enthrall subscribers. From dramas and documentaries to sport and reality television, viewers will be spoilt for choice. We thank our many partners, including Screen Australia, Screen NSW, VicScreen and Screen Queensland, alongside the talented creatives on these projects, without whom this remarkable line-up would not be possible.”

Screen Australia CEO Graeme Mason said: “Screen Australia is delighted to support these strong, distinctive Australian drama series and documentaries. These new productions are evidence of our wealth of exceptional local storytelling talent, and we look forward to them entertaining and engaging viewers on Stan.”

The Stan Original Series Black Snow combines the character-driven storytelling of a coming-of-age drama with the gripping mystery of a classic whodunit to create a unique series that is deeply rooted in its North Queensland setting. In 1994, seventeen-year-old Jasmine Baker was murdered. The crime shocked the small town of Ashford and devastated Jasmine’s Australian South Sea Islander community. The case was never solved, the killer never found. But in 2019, the opening of a time capsule unearths a secret that puts cold-case Detective James Cormack on the trail of the killer.

Black Snow acknowledges the traditional custodians of the lands on which the series will be produced, including the Ngaro Gia and Juru people of the Birra Gubba Nation, and the Australian South Sea Islander community and their significant place in Queensland’s history.

The series is created by Lucas Taylor, writing alongside Boyd Quakawoot and Beatrix Christian. Directed by Sian Davies and Matthew Saville and shot by Murray Lui, the series is produced by Rosemary Blight, Lois Randall and Kaylene Butler.

Based on Alex Scarrow’s international best-selling novel, Last Light follows petro-chemist Andy Yeats (Matthew Fox), who knows how dependent the world is on oil; if something were to happen to the world’s oil supply, it would set off a chain reaction – transportation would grind to a halt, supplies would cease to be delivered and law enforcement would be overwhelmed. While on a business trip to the Middle East, Andy realises his worst fears are coming true and his family is separated at this crucial moment. His teenage daughter, Laura (Alyth Ross), is alone at home in London while his wife, Elena (Joanne Froggatt), and young son, Sam (Taylor Foy), are in Paris. Amid this chaos, each family member will sacrifice everything to find one another, despite the distance and the dangers that separate them.

Last Light is produced by MGM International TV Productions in association with Peacock, Nordic Entertainment Group’s Viaplay, Stan and MBC; and is distributed by MGM. The series will premiere in the U.S. on Peacock.

The Stan Original Series The Jump explores the complexities of grief and the ways our sadness can unite us. The series follows Vivian Cunningham, a troubled young twenty-something whose life is well and truly in free fall. When Vivian learns her grandfather has died and left her his house on the edge of a cliff face, it soon becomes abundantly clear that the place she’s inherited isn’t just a home – it’s a suicide hotspot. And her grandfather used to try and save every lost soul that passed through. Suddenly, this blunt, angry woman is talking people away from the ledge, and strangely enough, they’re responding to her chaotic, nihilistic brand of psychology. Maybe, just maybe, in saving these people, she’ll slowly start to save herself?

The Stan Original Series The Jump is created and executive produced by Gretel Vella, who writes alongside Keir Wilkins and Emme Hoy. The series is produced by Alice Willison, with Nat Lindwall as executive producer and Ellie Madritsch as associate producer. The Jump partners are AMC Networks’ Sundance Now and Fremantle International.

The Stan Original Series Year Of will begin production in June. The series takes place in the same universe as the hit Stan Original Series Bump and is set in and around the senior years of high school – exploring the liminal time between childhood and adulthood for the kids and the renegotiations with adults that it brings.

Directed by Armagan Ballantyne from a screenplay by Jackie van Beek and based on a story by Jackie van Beek and Armagan Ballantyne, Nude Tuesday is a New Zealand/Australia co-production produced by Emma Slade for Firefly Films and Virginia Whitwell and Nick Batzias for GoodThing Productions, with major production investment from the New Zealand Film Commission in association with Screen Australia. Financed with support from VicScreen. Madman Entertainment are managing theatrical distribution in Australia and New Zealand, with Cornerstone handling international sales.

Stan’s bold new relationship series with a twist explores the struggle for love in the world of modern dating.

This addictive original and groundbreaking format will challenge a group of singles to relinquish their grasp on who they think their perfect partner is and instead choose someone based on a deeper connection.

DAWN OF THE DOLPHINS

Building the NRL’s newest team. With the game’s greatest coach.

Stan Originals and Onion TV present unprecedented access to the remarkable tale of the Queensland-based Dolphins as they prepare to transition from successful community club to elite professional force in the world’s leading rugby league competition.

The cameras track the year-long preparations, from securing the successful bid to the 2023 season kickoff, in a story anchored by the business of becoming ‘NRL-ready’ both in the boardroom and the football department.

Navigating the club through their first tentative steps is Wayne Bennett, a coaching giant and notably private person who – likely in his final assignment – returns home to Brisbane to oversee the recruitment and help lay the building blocks for long-term success.

Joining Bennett is CEO Terry Reader, an experienced sports administrator and a walking, talking example of blue-collar toughness who deals with the endless challenges of creating a club from scratch. And the support cast grows week by week, including Peter O’Sullivan, the country’s most revered talent spotter, and the man negotiating the club’s first major signings.

This three-episode series is an exclusive backstage pass to a real-life portrayal of a start-up sports organisation, of livelihoods that will hang off the numbers on the scoreboard, of a talent-rich region hungry for its own flagship NRL club, and the building of a business from the ground up.

Based on the acclaimed book, Bad Behaviour is an emotionally and physically intense glimpse into the lives of teenage girls at the wilderness campus of an exclusive girls’ boarding school. The series will premiere exclusively on Stan in 2022.

The Stan Original Series Bad Behaviour is written by Pip Karmel and Magda Wozniak, directed by Corrie Chen and produced by Amanda Higgs.

The series is produced by Matchbox Pictures, part of Universal International Studios. Major production investment from Screen Australia in association with Stan. Developed and produced with support from VicScreen. Distribution is handled by NBCUniversal Global Distribution.

Dan and John Edwards return to produce the series, alongside Claudia Karvan and Kelsey Munro. The Stan Original Series Bump is produced by Roadshow Rough Diamond with major production investment from Screen Australia and in association with Screen NSW. ITV Studios is managing international sales.